There is a reason they call it Chimera (a nightmere)

Than why do I use it? It has two nozzles, hence slicing with Ultimaker Cura (among others) I can assing different temperatures for each nozzle, hence printing support with PLA at 220 Celsius, and the part in PETG at 250 Celsius. A Cyclope system has a common nozle and that would make me bake the PETG at 250 Celsius or higher, filling my house with the smell of burned popcorn for the lenght of the print.

At certain temperatures the heatsink (the golden etched aluminium radiator) goes hot itself (insufficient air cooling) than the filament that is supposed to stay cold and rigid inside becomes too hot and jelly, and that is the end of your print. the fan is a 30x30 mm 12 volt.

Up to 200 Celsius went OK, but that means PLA alone, nothing else. The heatsink went some 40C, pretty much OK.

ABS becomes a no go. It requires 245Celsius, and the heatsink went over 55 Celsius. ANd the print went cockoo since the filament jammed in the heatsink neck.

So I went to print with PETG, thecnically it is nylon, it requires 250Celsius, and that brought my heatsink at 70 Celsius and blocked everything.

Than I designed and printed a fan adapter that fits on the heatsink as a 30x30 fan, but at the other end I can fit a 40X40 fan. That pushes almost tripple the air in the radiator. So the heatsink went down to 45Celsius again.

I am preparing to print at 330 Celsius, and that requires an even bigger fan, so my next adapter will be for a 50x50 fan, high air volume model. Just in case it is not enough I designed an adapter for a 60x60 fan too. 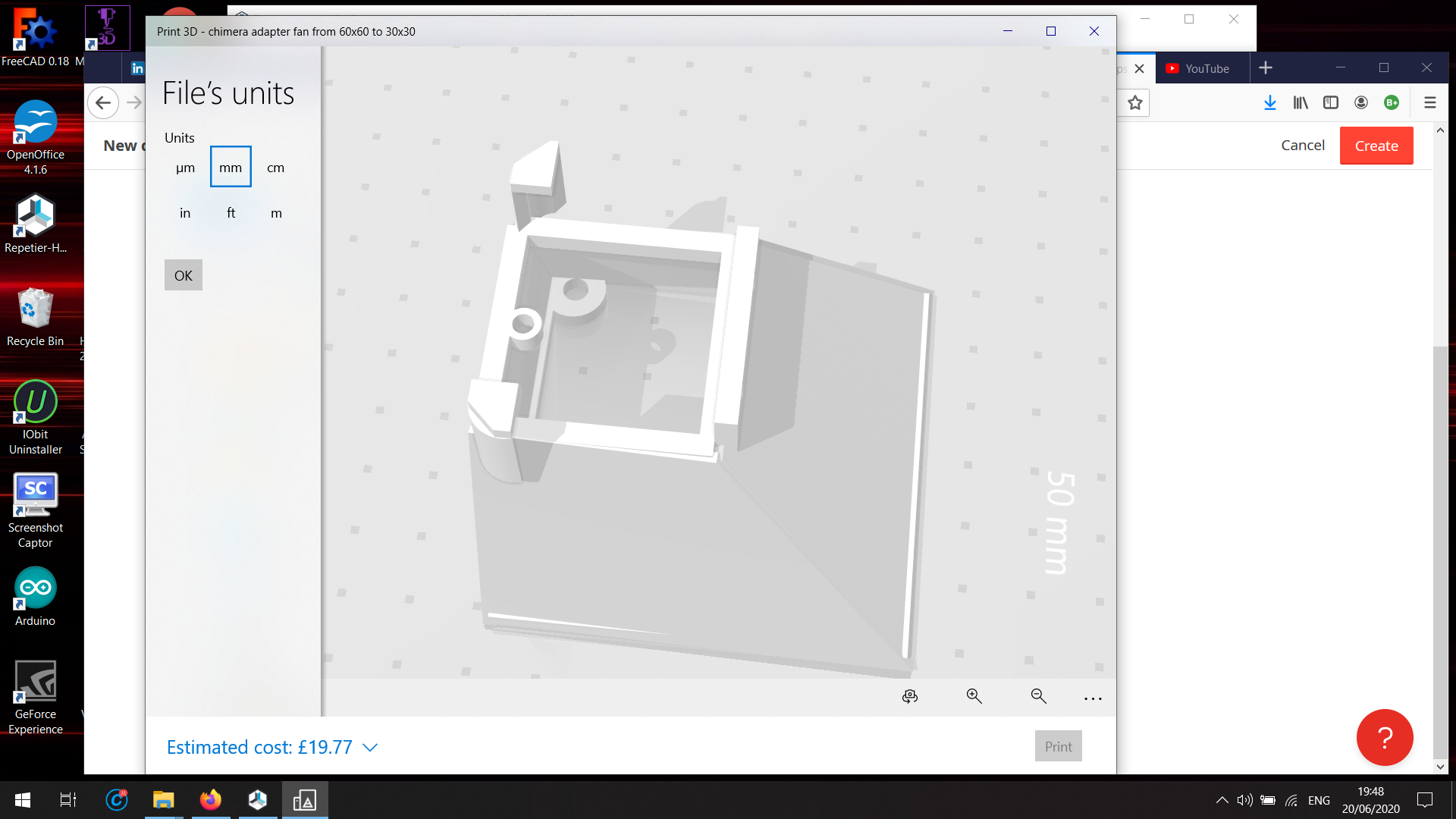 40x40 did something but not much, I don't have a 50x50 or a 60x60, just bought some online, a month waiting for them, trying to sort out heat sink cooling isues wile printing with high tempeatures, let's hope more air can dissipate enough heat

Although there is 12 times more airflow, I still got into trouble and the filament jammed in the throats.

Looking at the V6 heatsink total air flow exposure surface, it is some 3 times more than the Chimera, and the Chimera holds 2 hot ends, and this is fatal at higher temperatures than 230Celsuis apparently, wih all the air I could provide.

So it is a fail for high temperatures by definition, since for a double hot end I need 6 times more surface to wash awaythe undesired heat.

So I go back to what worked before, and will try to improve that, and that is a dual configuration of V6 type hot ends.

I just milled out 3mm from the thicker part of a couple of heat sinks to suit a different type of nozzle with shorter thread than the originalsthe threaded neck that connects the heat sink and the hot end must 1toch the nozzle tight, or molten filament escapes around causing blobs on the print, and 2 keep the hotend away from the heat sink some 3 mm, ut because the new nozzles were short on thread either could not tighten well enough or the hot end and the heat sink would touch tranfering heat where not desired.

The Chimera instead has longer thread on the throats solving this issue for standard hot blocks.

So I will try to use on the dual Volcano (V6) a pair of Chimera type of nozzles, fingers crossed...

Nice work up on how to work through issues and adapt and improve.

Mark Ayers Nice work up on how to work through issues and adapt and improve.Kudos!

I am a professional prototyper, that is how I earned my bread for years in robotics Mark, so I know how to tackle situations when I have no clue what I am doing, just fail, and fail, and fail, every single time recording the parameters, untill a pattern arrises, and once you have a pattern, you can test solutions.

A master has failed millions of times more than an aprentice has even tried.

Dual Volcano on indipendent fans, 80mm diameter with funel to 30 mm diameter to fit the Volcano neck, went up to 260C than gave the same issues.

I have nou made myself a Chimera style water cooled block, just tested it for leaks last night for a few hours, I am using an aquarium water pump to keep the flow in contant pressure, and I bought a games computer liquid cooling radiator, to run the hot return water through it and cool it down.

Just curious how this is going to work, I think I shall make a new post about it soon.