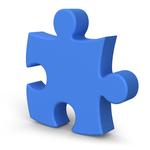 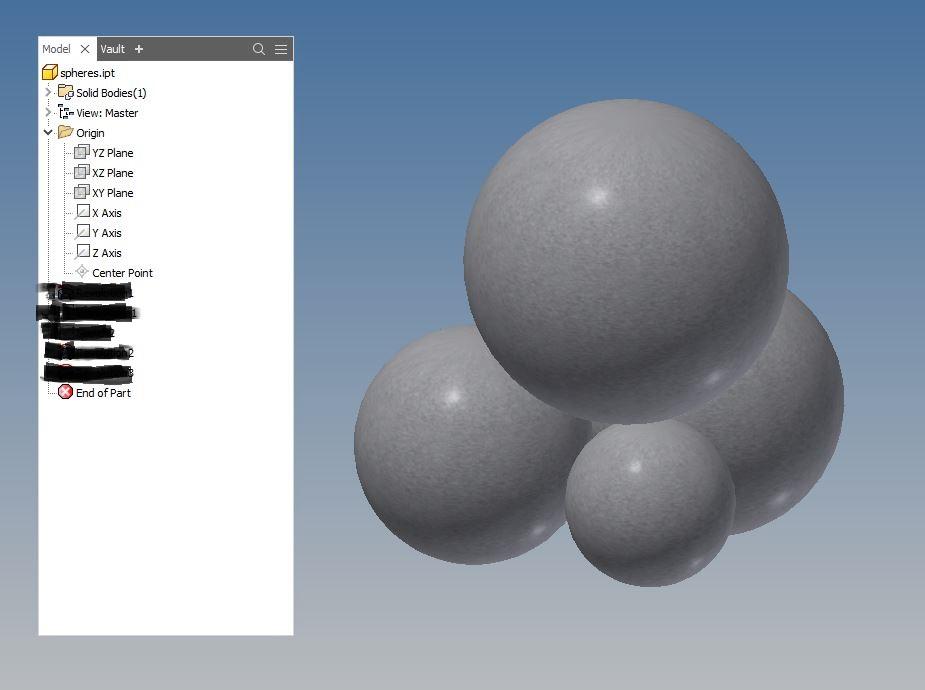 I did it in 5 features using Inventor. I think 4 may be possible.

Solution using old fashioned descriptive geometry and 2d sketches: This is the method used to generate the challenge.

Create a sketch for the 3 smaller spheres on plane XY. Centerpoints for these spheres are at points A, B, and C. Create circles D and E with a diameter equal to the larger sphere. Circle D is tangent to circles A and B and circle E tangent to circles B and C. Create semicircles A and B along with their centerline AB. It is important that Line BC is perpendicular to the Y axis and point E is constrained to the Y axis. 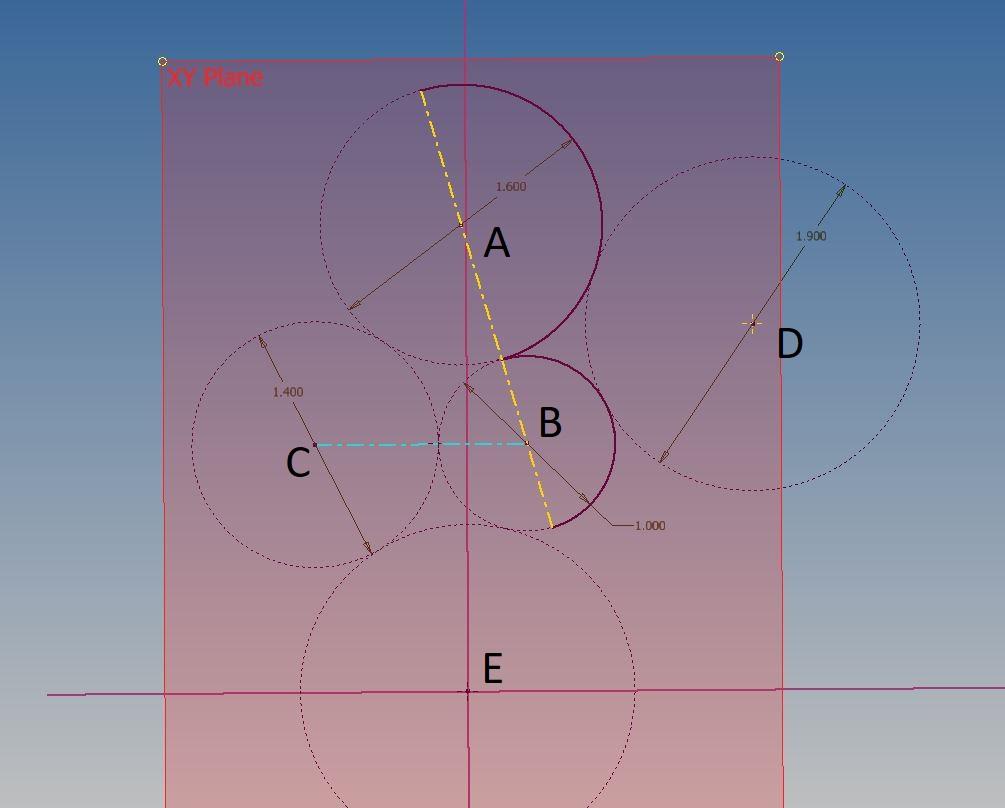 Revolve semicircles A and B to create the first two spheres. 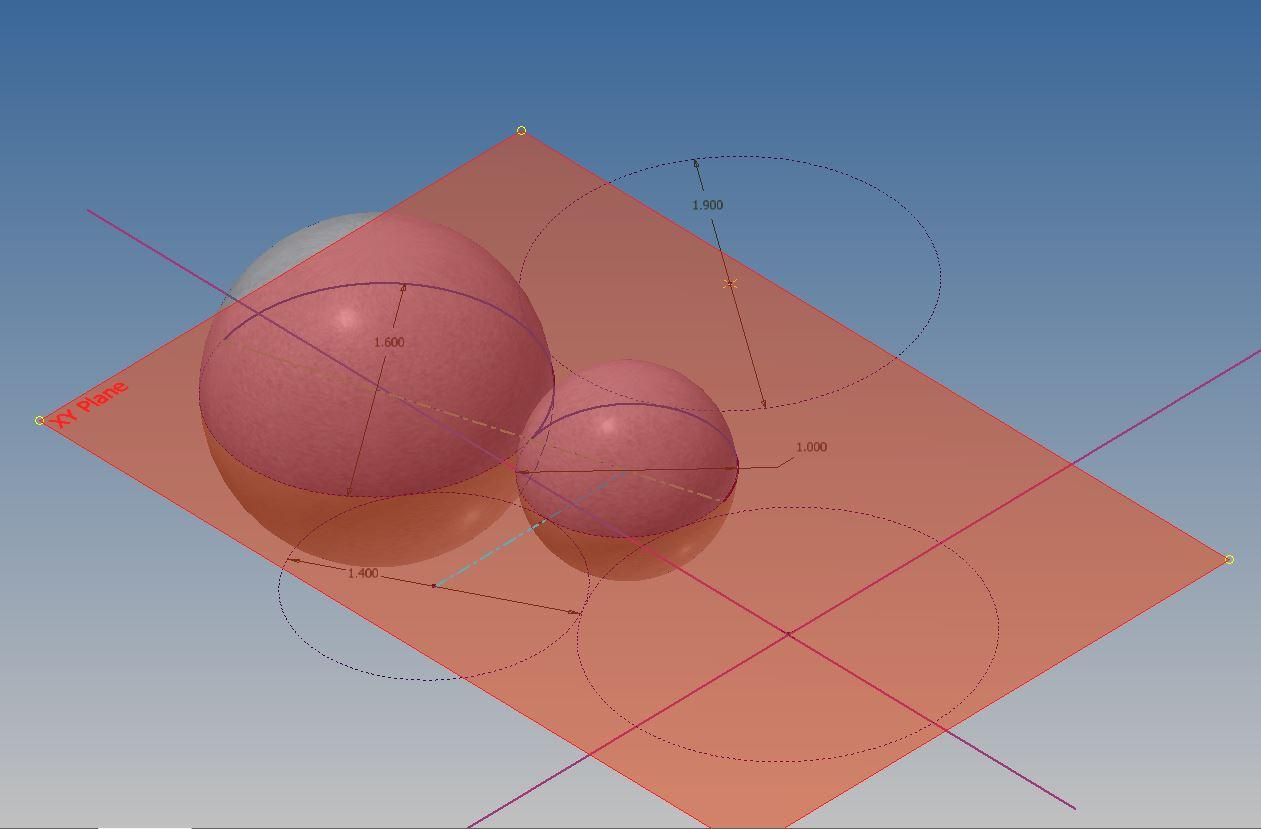 Create a plane perpendicular to line AB through point D. Create a sketch on this plane and project line AB and point D onto it. Revolve a circle with centerpoint B through point D. This circle (shown in yellow) becomes the path for the larger sphere as it rolls around spheres A and B. 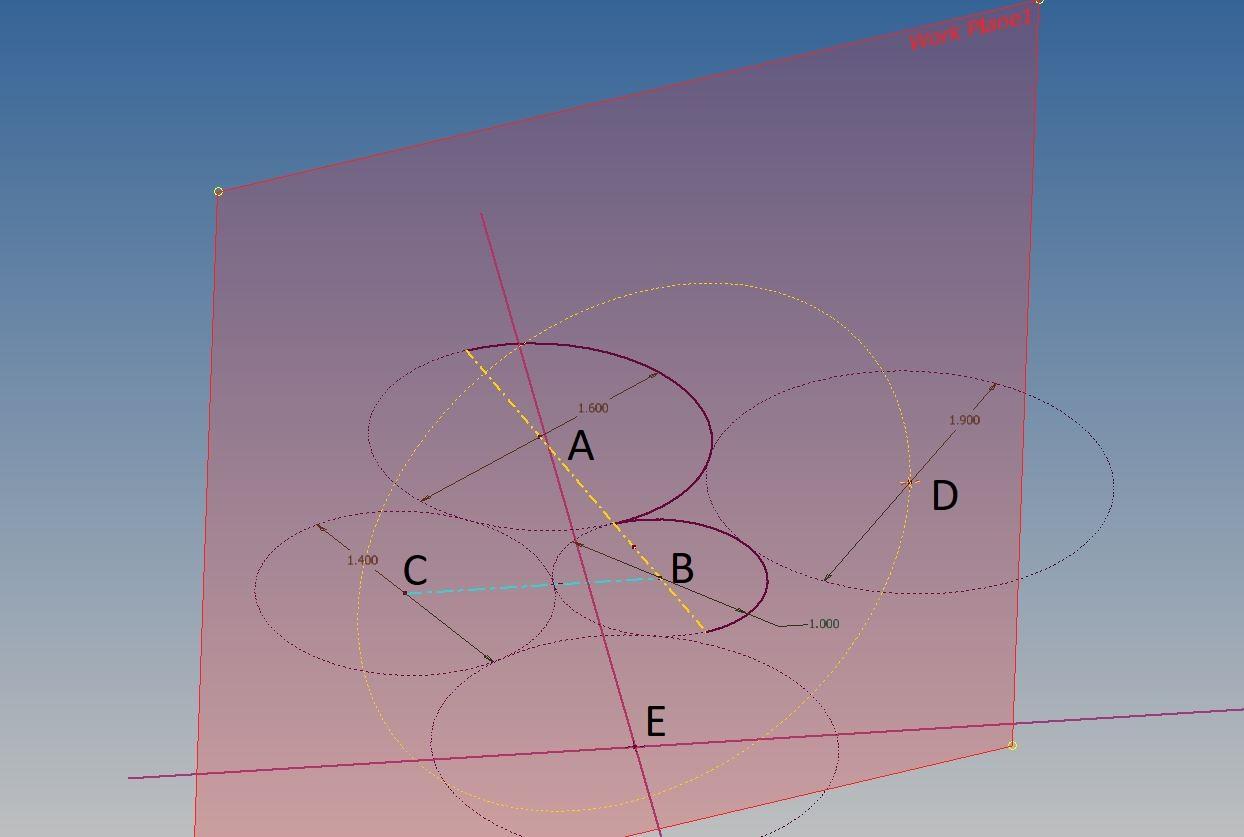 Create a sketch on the YZ plane and project the circle created in the previous sketch onto it. (That is the narrow yellow ellipse in the following picture.) Project line BC and point E onto the sketch. Revolve a circle with centerpoint B through point E. This circle (shown in cyan) becomes the possible path for the larger sphere as it rolls around spheres B and C. Point F is the intersection of the two paths. Create semicircle F for the larger sphere. The axis inclination is unimportant. Note that there are 4 possible intersection points between the two paths. Logic will dictate which point is the correct choice. 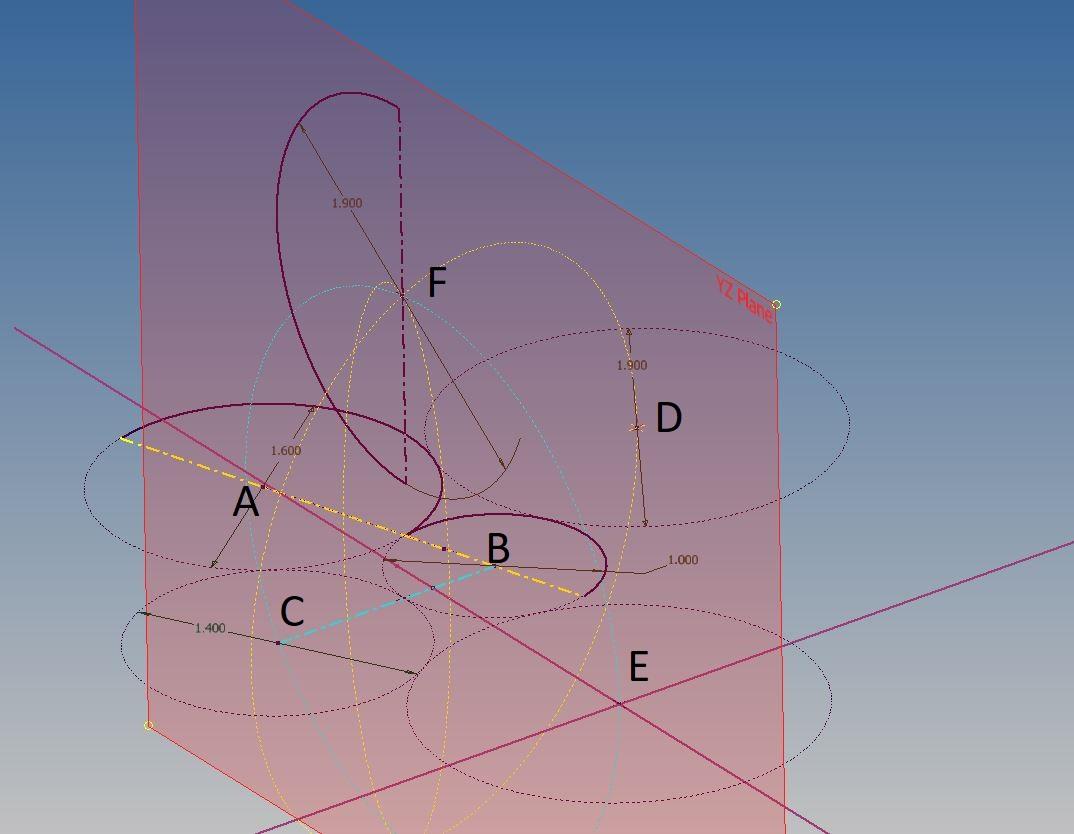 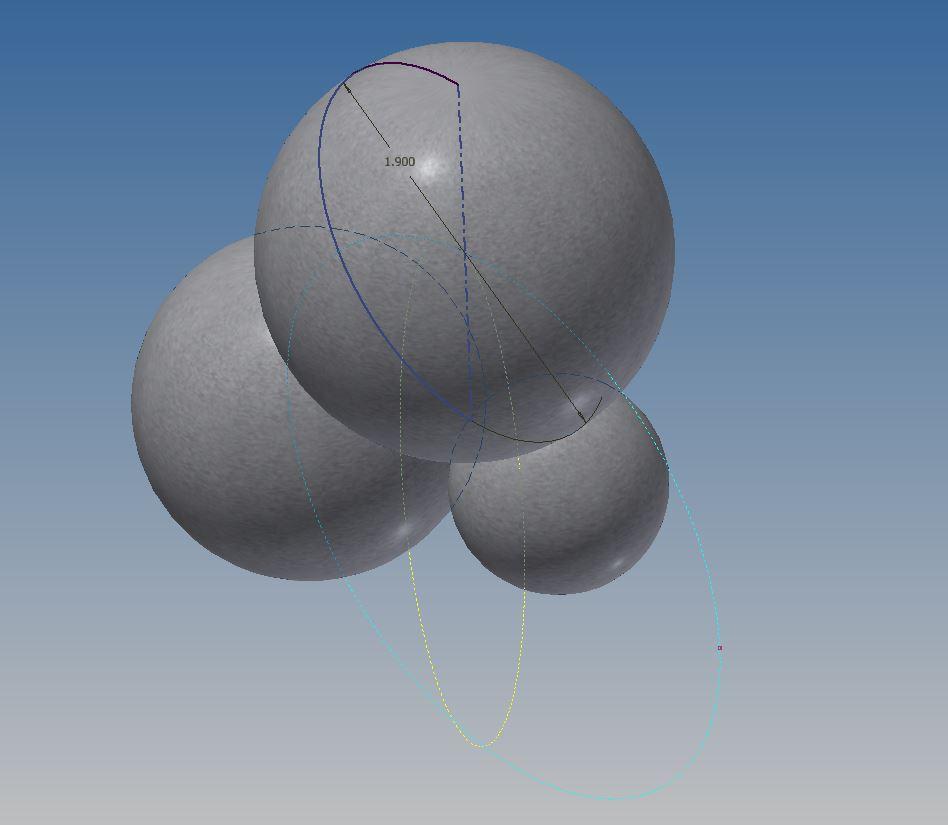 Create another sketch on plane XY and project circle C from the first sketch. draw semicircle C with its axis. 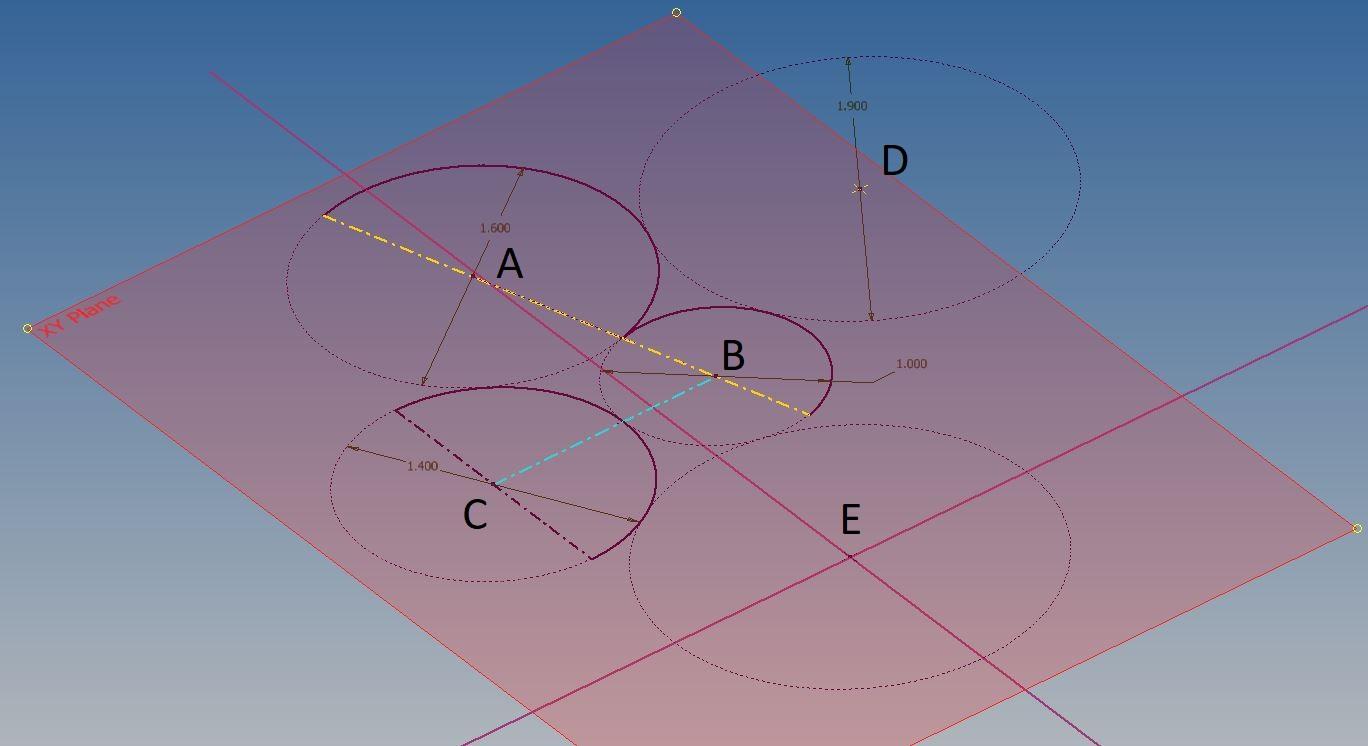 Revolve semicircle C to create the final sphere. The end result requires 5 features including a layout sketch and a workplane. 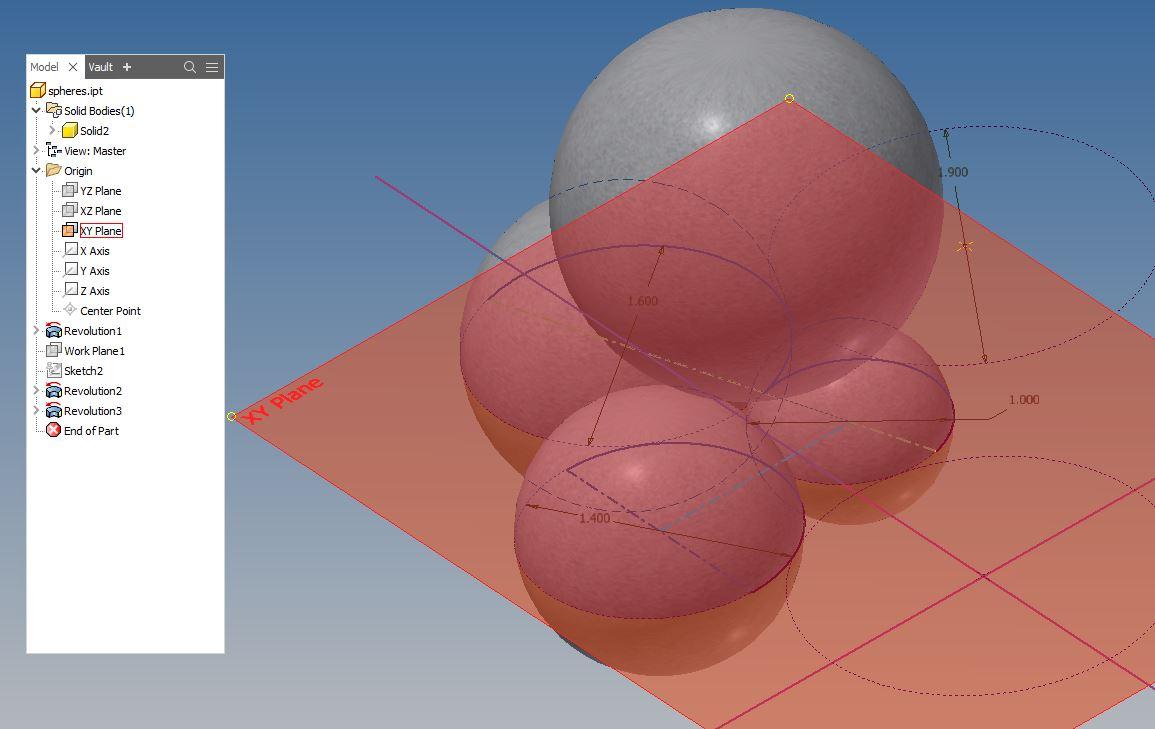 And then create the drawing views to check the location 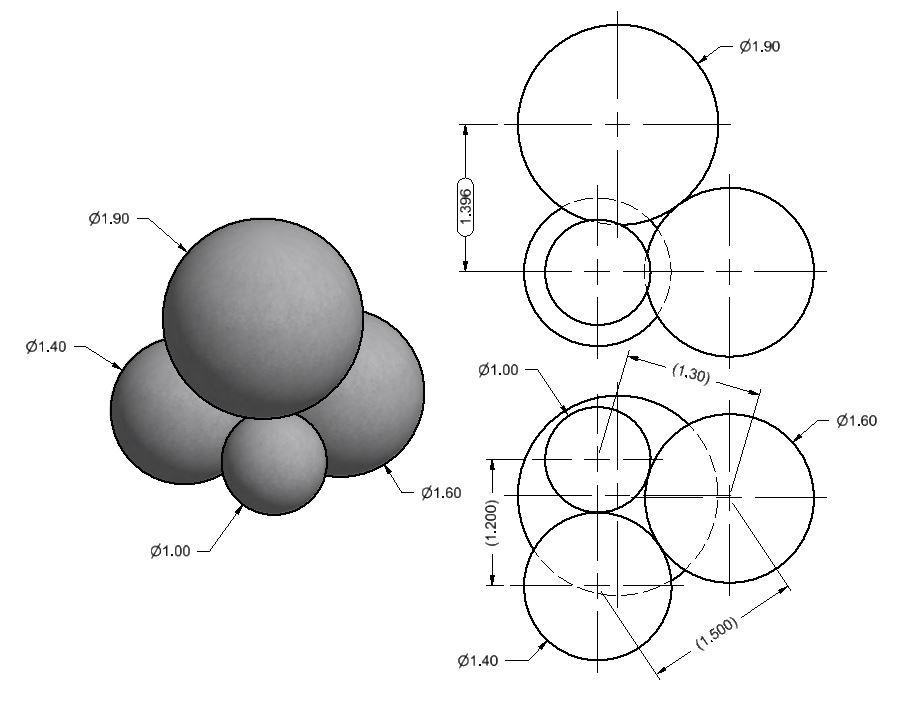 I'm guessing this matches the solution by : FredSWUG

Create a 3D sketch and draw a pyramid with 6 lines (edges). Points A, B, and C are constrained to plane XZ and will be the centerpoints for the smaller spheres.. Point D is the centerpoint for the larger sphere. Points C and D are constrained to plane YZ. The length of each triangle edge is the sum of the radii of the spheres that will be located at each endpoint of the edge. 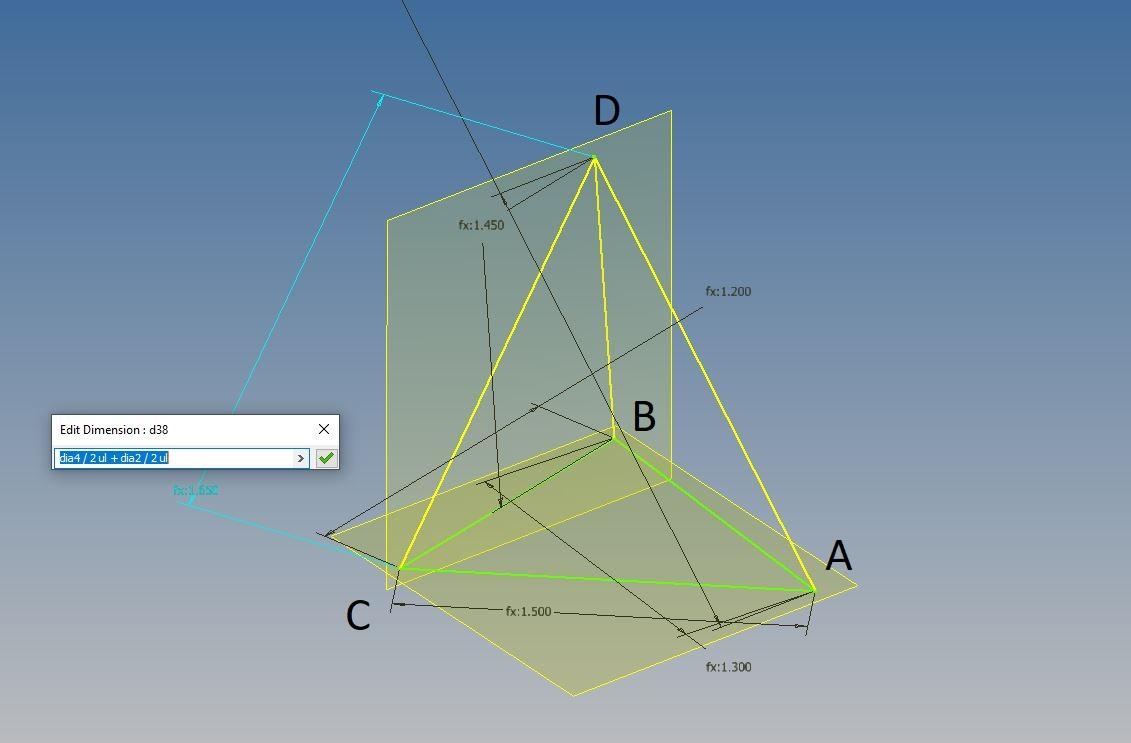 Create a sketch on plane YZ. Project points C and D onto it. Draw semicircles for spheres C and D and a centerline on line CD. Remember D should be the largest sphere. 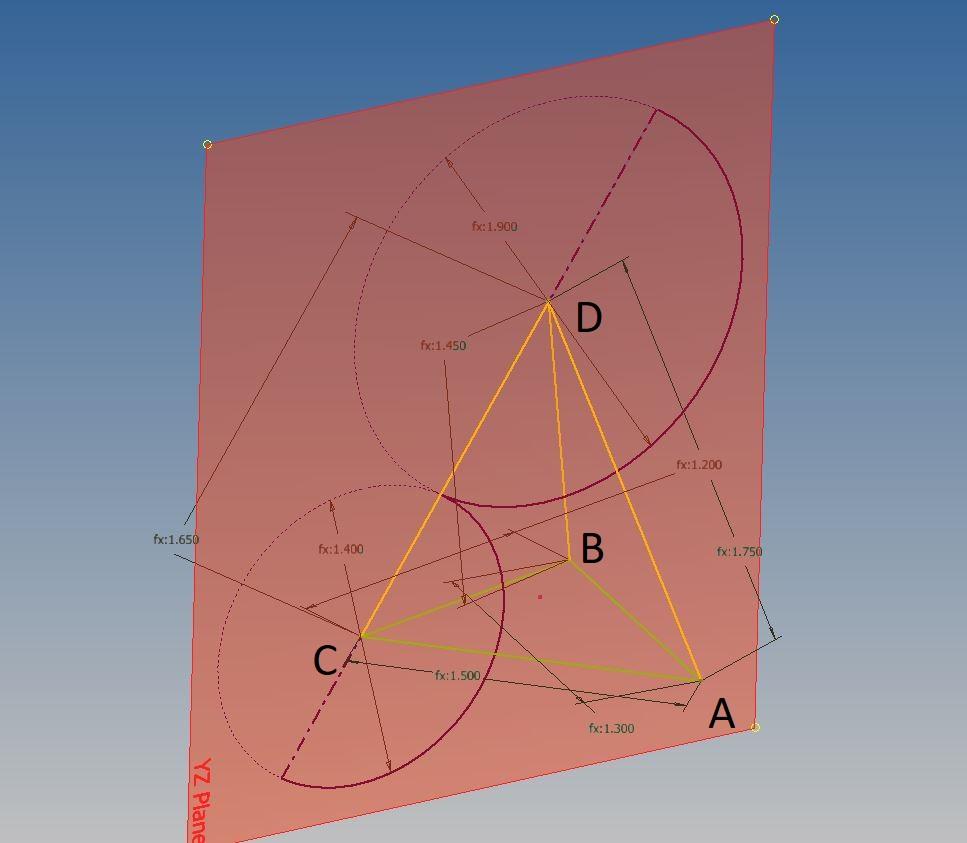 Revolve the semicircles to create the first two spheres. 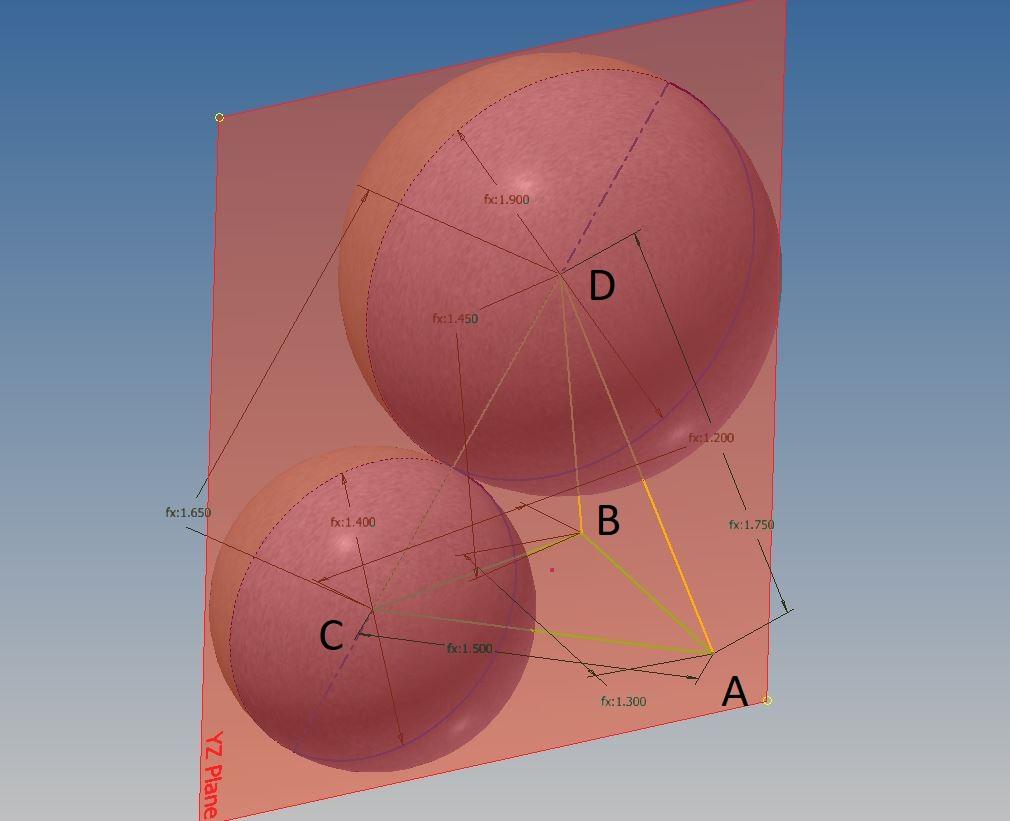 Create a sketch on plane XZ. Project points A and B onto it. Draw semicircles for spheres A and B and a centerline on line AB. 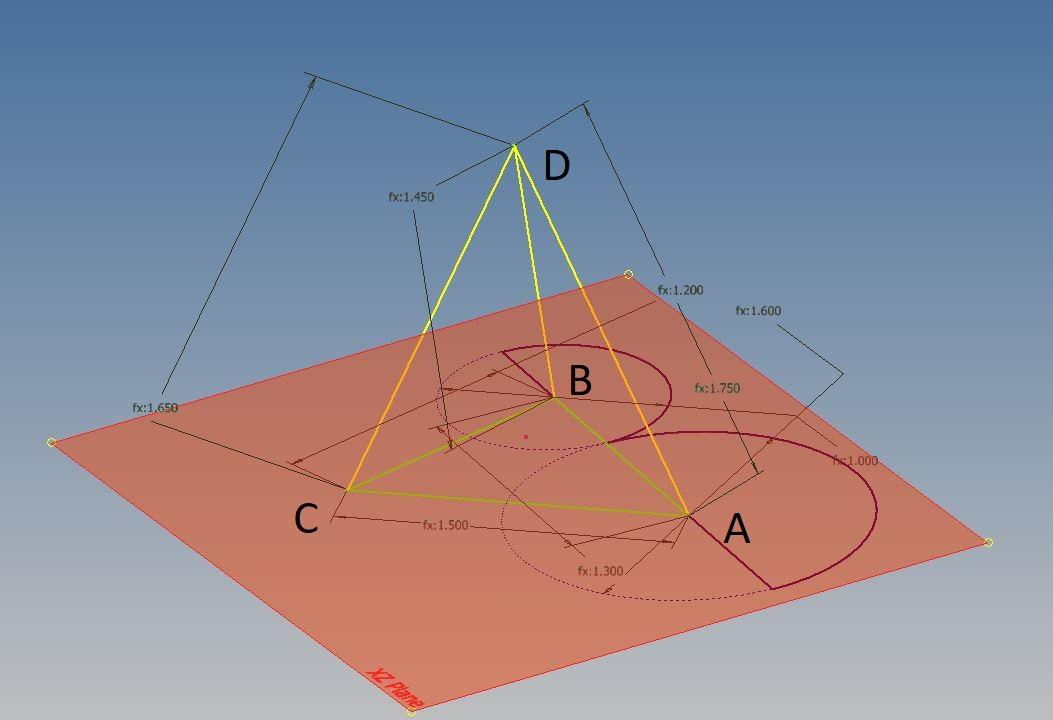 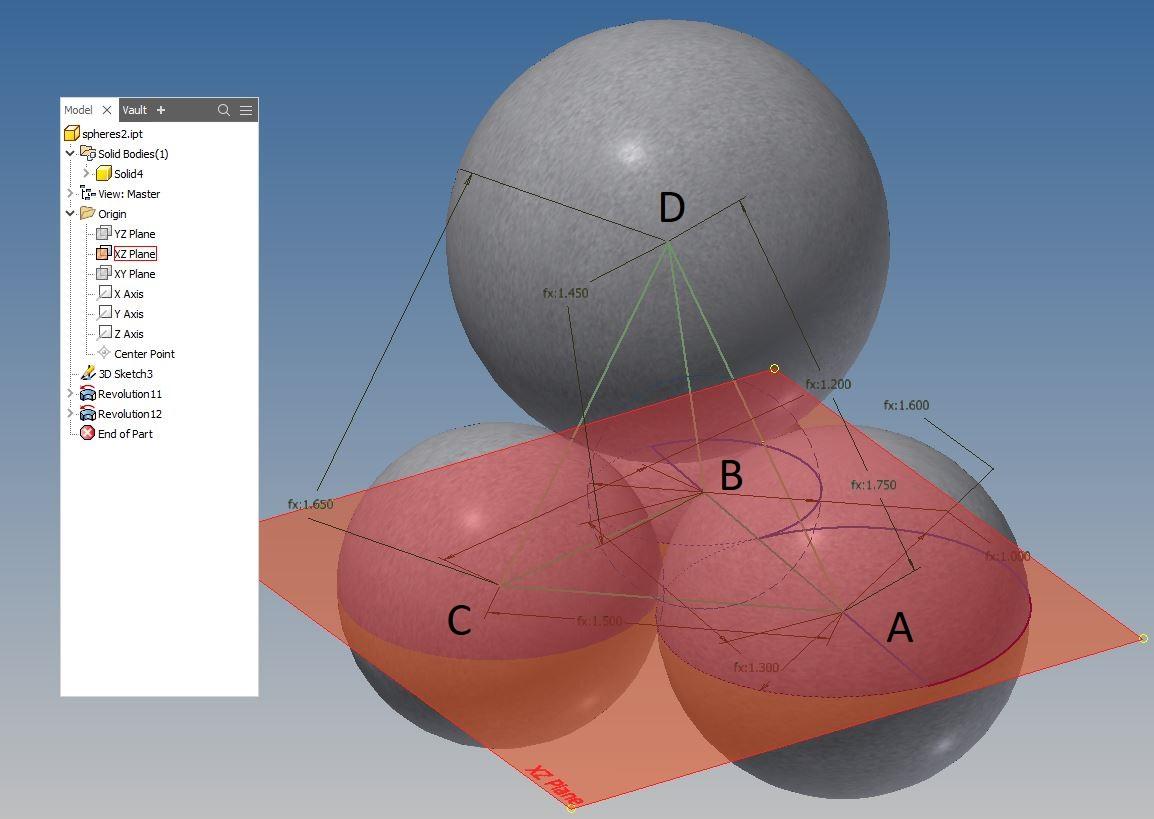 If the 3D sketch points A, B, and C for the smaller spheres were constrained to a workplane as originally shown then creating a drawing view to check the result will be easy. 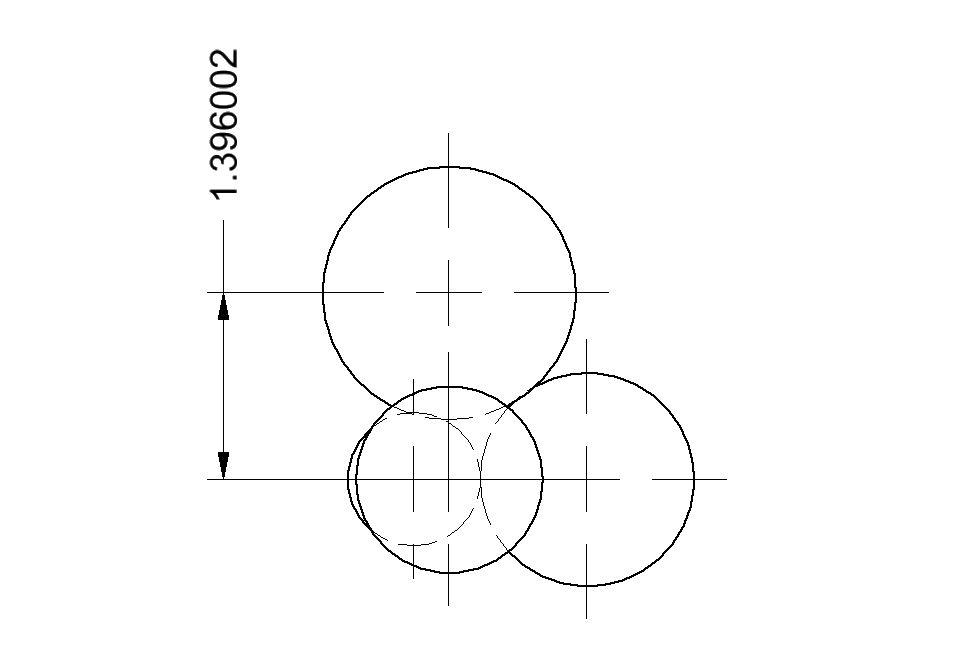 I did some more work on this one and got it down to 2 features. Basically did all the work of the 3d sketch in the first 2d sketch. 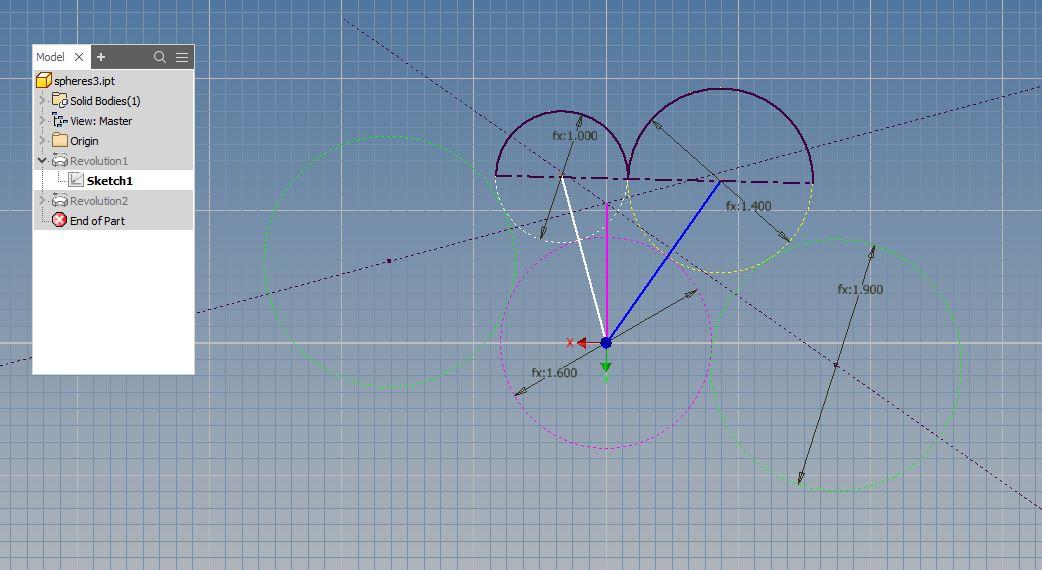 The magenta line is constrained to the Y axis and will become the base of a triangle for locating the 4th sphere in the second sketch.

The magenta line in the previous sketch is the base of the triangle in this sketch. The hypotenuse is the sum of the radii of the 3rd and 4th spheres. The other leg is constrained at a right angle to the base. 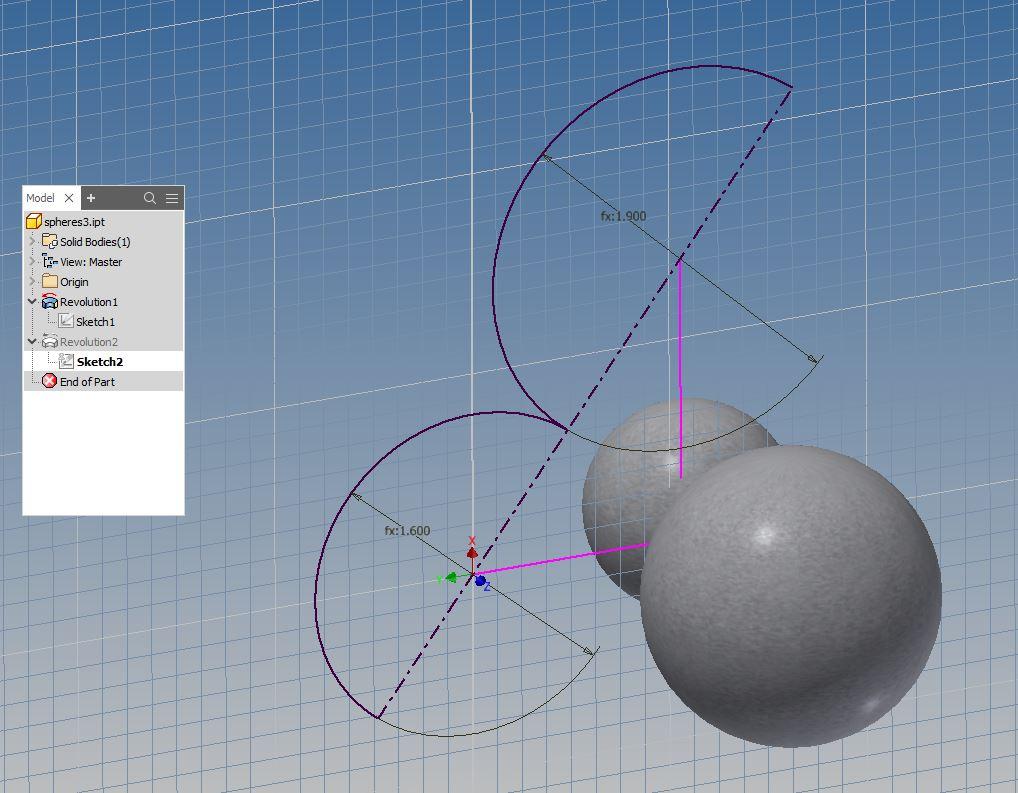 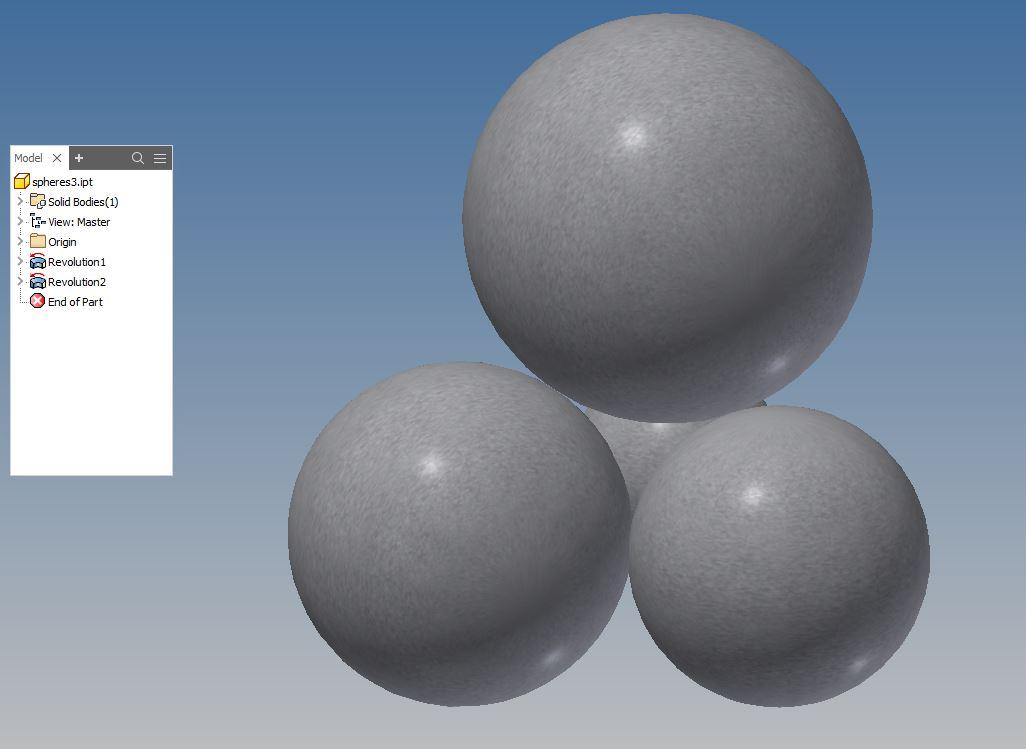