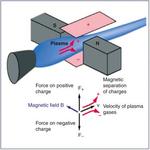 Schematic comparition between a turbogenerator and an MHD generator

This was introduced in the begining of the seventies. Then the US government understood that MHD could play an important role in future military projects. At the same time the US scientists undestood the MHD had something to do with hypersonic flight. They decided to desinform people. Officially, in USA, MHD was abandonned. Civil MHD got starving. Big industrial projects were abandonned. But, at the same time, an intensive effort began, in full secrecey, about military MHD. This was discovered very recently (2001). The reader if free to believe or not to believe this. We were told about what happenend in US between 1970 and the present days by top level American scientists involved in secret black programs, concentrated in area 51. The only argument about this is based on scientic grounds. Even now, people ignore many very important features about MHD applied to supersonic gas flows, which made possible a fantastic and fundamental breakthrough in USA in the middle of the seventies. Thirty years after American master the world with advanced technologies in many (military) fields, including long duration hypersonic flight, up to Mach 12.

Let us present some basic concepts.

In a supersonic flow we may consider "Mach Lines" :

Mach lines (or Mach surfaces) in a superonic flow

The angle of such Mach line depends on the local value of the velocity.

Impact of the velocity rising of the Mach angle

If we consider a supersonic flow, Mach lines, "characteristic lines" are real. They map the flow. Next, a 2d supersonic test nozzle (supersonic wind tunnel).

In the convergent section the fluid is in subsonic condition. From a mathematical point of view the characheristic lines, (the Mach surfaces) are imaginary. The velocity of the sound is reached at the throat of the nozzle. Then the Mach surfaces become real. We can figure it :

Evolution of Mach surfaces, or Mach lines in a supersonic nozzle.

In the nozzle the velocity grows continuously. At the same time the Mach angle decreases (it is equal to 90° at the throat section). It corresponds to the "natural variation" of the Mach surfaces system, due to the expansion of a supersonic flow.

Now, consider a 2d supersonic flow around a flat wing. We may compute the theoretical Mach lines system, through characteristic theory:

Theoretical characteristic lines around a flat wing imbeded in a supersonic gas flow.

This is not physical. That's "pure mathematics" (a solution of a "characteristic system). It shows how the caracteristic surface collide, accumulate in some place. They are elementary pressure variation characteristic surfaces. In the middle of the flow we see a classical expansion fan, were the pressure gets lower and were the gaz is accelerated. But in another regions wee see how the Mach surfaces accumulate and tend to give attached shock waves. The next figure corresponds to really physical solution, with subsequent attached shock waves :

Next : these flat attached shock waves.

Next, these flat waves, plus flow lines.

If the leading edge is sharp the front waves are attached. Se detail :

If the leading edge is blunt the situation is somewhat different. The shock looks like a bow.

From a classical point of view these shock waves cannot be avoided. The corresopond to pressure en temperature jumps. When the Mach number becomes higher that 3 material cannot stand the heat flux and gets vaporised. In "scramjets" one cools the leading edge with liquid hydrogen and oxygen, which makes possible to achieve short duration Mach 5-6 flight.But hypersonic flight (Mach 12) is considered as impossible, on technological grounds. In 1947 the ufo phenomenon arose a stange question : is it possible to achieve such hight Mach number flights ? In Roswell Americans gor the crashed machine, which proved immediatly two things :

- The came from othe planetary systems.

It was decided to keep a full secrecy about that. An intense and active policy of dinsinformation was build up in USA, which is still in action. Nasa, for example, in its official website explains that ufos are nothing but an illusion, almost 50 years after. It took time to American to undestand that MHD was the key, the master word of the hypersonic (and silent) flight. The silent flight of ufos showed that shock waves (and turbulence) were avoided. To illustrate that we shall refer to the author's personal works (extending during the sixties and seventies). This research was done with quite modest lab's equipment, compared to the huge US effort, hidden in underground area 51 plants. But this will be enough to show the basic ideas. On the newt figure a "Faraday MHD linear convertor' with its MHD channel and its two coils.

If we remove the two coils we get that :

Faraday channel (the coils have been removed)

Here the convertor acts as a MHD generator. The supersonic flow enters the channel at velocity V, which goes with an induced electric field E x B . This last produces an electric current in the gaz, which loops through external loads, showed. A part ot the kinetic energy of the gas can be converted into electricity. This goes with the slowing down of the gaz. The system of Velocity, Electric Field and subsequent Lorentz force is shown next :

Electric field and Lorentz force field in a MHD generator.

This first idea is very important. In effect we see that a MHD accelerator slows down a supersonic fluid. If conveniently managed we can imagine that the fluid parameters can be modified is a "soft way", without shock wave birth. That is the key idea of the hypersonic flight concept, as will be shown further. Next we shows the characteristic pattern of Mach lines in a MHD generator. The Mach angle changes continuously and no shock occurs.

Shockless modification of the Mach lines system, due to Lorentz force action

This is a very simple idea, but it was considered as top secret during a very long time over all the world. On another hand, a MHD convertor can be used as an accelerator. To do that we just inject electric power in order to inverse the electric current ans get accelerating Lorentz forces. Then we can modify the local value of the Mach angle. In my lab, in 1967 we got very impressive accelerations along very small lenght.

The gaz enters the channel on the left and Lorentz forces accelerates it.

Let us show that this was not a dream. Next, my MHD lab in the sixties at the Instutut de Mécanique des Fluides de Mareseille, France. .

My MHD lab in the sixties. Front : electrodes. Left, an old Tektronix vacuum lamps oscilloscope. Below : the Faraday convertor with

hung coils. Besides, an "ignitron" used to commute the 50,000 amperes electric current produced by a capacitor bank.

If was a "short duraction wind tunnel" based on a "shock tube". A shock driven argon flow (200 microseconds) was pushed in a 6 meters long constant area wind tunnel. The gaz was moved and compressed (pressure after compression : one bar). The gaz was heated up to 10,000°K, whick provided a very good electrical conductivity (3000 mhos/m). The velocity of the gaz, at the entrance of the MHD channel was 2,750 m/s. This last was 10 cm long. When carrying up acceleration experiments the exhaust velocity reached 8,000 m/s, which demonstrated the extraordinary efficiency of Lorentz forces accelerating power with high magnetic field strenght (2 teslas) and high electrical current densities. Next, the classical MHD efficiency :

MHD efficiency. J is the electric current density, B is the magnetic field, L is a characteristic lenght, below : the mass density and v the velocity.

At the begining of the eighties a french engineer, Betrand Lebrun, started a phd with me. I defined the basic idea of the shockless supersonic flight. This was a civilian research but we know that similat reasearch was carried in secrecey in the famous Lawrence Livermore Laboratory, California, at the same time. We have already presented the general pattern of Mach lines, associated to the theoretical supersonic flow around some flat wing. We have seen that we could change the local value of the Mach angle by a subsequent choice of a convenient Lorentz force Field. For example we can accelerate the flow around the leading edge, using a transverse magnetic field and two wall electrodes, as following :

Accelerating electrodes, at the vicinity of the leading edge

Next, the subsequent Lorentz force field :

With such device it was possible to cancel the front shock wave at the vicinity ot a sharp leading edge which showed that a shock system could be avoided. This changed drastically the problem of the hypersonic flight. Now the goal was to cancel and shock around a flat wing, wich implied to keep the Mach lines parallel :

Up : the idealiazed characteristic lines pattern (Mach lines of Mach surfaces). If a convenient Lorentz force field could be applied around the model it was expected that une characteristic line focussing phenomenon could be avoided. This was shown through computer calculations and presented at several international MHD meetings (Tsukuba, Japan, Pekin, China, see bibliography and mentioned papers). The general pattern of Mach lines becomes the following :

This work was done in a civilian laboratory but we know that at the same time american did the same stuff is high level of secrecy. In France the officials were deadly scared that such results could evidence the extraterrestrial nature of ufos and the became mad at it. All the civilian research was ended. The military tried to continue this research in their secret labs, for their own, bu they failed, due to their lack of knowledge. During thing time the US projects experienced a very strong acceleration. Parallel research was intensively carried, about torpedos and submarine propulsion. To avoid to confuse the mind of the reader we will talk about that further.