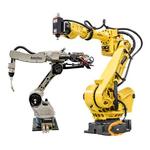 THE FUTURE OF SEX

A report earlier this year claims:

By 2035 the majority of people will own sex toys that interact with virtual reality sex.

'Sexbots' will start to appear in high-income, very wealthy households as soon as 2025.

Sex with robots will be more popular than human-human sex in 2050.

Love and the act of sex is set to become increasingly separate, with relationships increasingly becoming based on more than just sex.

emmmmm...this will be banned in many areas .

How can a professor name this "sex robort" project? lol

I don't believe sex machines will ever replace intimacy, but its probable that an alternative to human on human sex can have a small consumer market. I imagine the machine would need to be built very robust for the type of users it will most likely have.

if peaple who can not have partner will remain in future

Ali Azadi it may be true .and may happen in future if ....if peaple who can not have partner will remain in futurebecause people who have a partner...

Ali Azadi i guess so

Everything in this world is evolution ... everything can happen

The need for humans to "get off" is a pretty basic animal need.

The girls have their toys and guys have "the palm sisters". Actually boys have some toys as well, but I have no idea if they actually work.

To say, sex robots are coming is no surprise. Really, it's the sex toys getting really, really big. Let's see ya try to hide that in your bottom dresser drawer.

And of course, there will be the market of sex robots portraying the forbidden sex partners.

I disagree that robot sex will be more popular, because the caveman need to get off is the same need for men to hunt females to mate with, and no machine or robot will replace that. Today, we refer to those males as "players". Other men actually look for relationships.

Females are discovering their own needs and are far more open today to hunting for their own partners than 40-50 years ago. There are female players as well. They are the ones who chase the married man, just to see if they can be seductive enough to make him cheat on his spouse.

Sex robots will exist for those few who have a need. I would say they will be about as popular as people who have stationary exercise bikes in their homes. They will use them for a couple of months and then the dust will start collecting.

You also got realised there is a political angle to all the newspaper. this sound like the exaggeration that usually get throw around in the news now days.

dai xu You also got realised there is a political angle to all the newspaper. this sound like the exaggeration that usually get throw around in ...

No is exaggeration... only the opinion

http://invdes.com.mx/tecnologia/ingeniero-chino-se-casa-una-mujer-robot-construida/ translate please.. this a case

I think there will be a big market for sex robots in China because there are many single people in China, especially in rural areas. If it's cheap, sex robots will be popular with singles