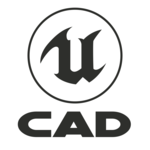 UE4CAD - CAD in the Unreal Engine

Ask Me Anything - Render your CAD in the Unreal Engine

Technology has changed. Real-time rendering is where you need to take your CAD data, and you need to get rid of those frame-by-frame software rendering apps and costly render farms. For me personally, I use KeyShot only for previewing my SolidWorks creations, or I use it as an OBJ converter. I would never render again in KeyShot when I can just pop it into Unreal Engine do amazing things with my CAD, and my clients CAD!

Feel free to ask me anything here or begin your own research into what rendering in the Unreal Engine can do for you!

Can your rendering app do this?

Hi I'm thinking of trying Unreal. I currently use Solidworks with Keyshot. Any tips for easily importing Keyshot to Unreal and keeping the maps/textures?

Any general tips you can give?

Camo Hi I'm thinking of trying Unreal. I currently use Solidworks with Keyshot. Any tips for easily importing Keyshot to Unreal and keeping th...

Hi Camo, I’ve been waiting over a year for someone to ask a question :)

So here’s your answer!

What we’re really talking about here are material ID’s.  In SolidWorks, you typically add color to your model, which is actually assigning a material ID to that particular surface, body, part, assembly, etc.  As you’ve noticed in KeyShot, these become individual materials for you to render with.  If you want to use a model in Unreal Engine that you’ve been rendering in KeyShot you’re limited to an OBJ export (compatible with Unreal Engine) and it has a .mtl file attached.  This file format (and the KeyShot software) doesn’t “bake” out the textures, meaning your export will not have the necessary image files that UV wrap onto your design as its seen in the KeyShot software.

With me so far?

Don’t worry, it gets EASIER.

Don’t worry, it gets BETTER. 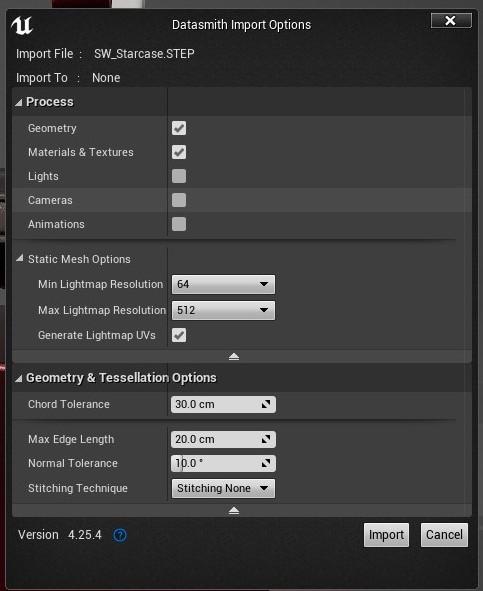 Wow very detail! Thanks so much. I will try this soon. I have been slowly working through the online tutorials Unreal offer.

Datasmith can open Solidworks files natively now. Would that be better than exporting as STEP files then importing?

Importing the default Keyshot textures is a really good idea. I feel like this was confusing in Unreal to just make a simple texture/material with a diffuse colour and some gloss.

Hi Camo, I use STEP cause have/had several issues with curved geometry using the native import of SolidWorks. For instance, I imported a bubble-shaped cockpit for a client and the native SW import had bad tessellation which created a lot of 3D and lightmap artifacts. Using the STEP file which sorta "flattens" the 3D file, eliminated those problems and I was able to get the project done! Datasmith is always getting updates to improve the stability and compatibility, and I'd expect eventually using native SW imports, but not quite yet ;)

I'm sure you found it, but the Unreal Academy has amazing tutorials.

Good luck with your projects!

Hi, I am looking to get started on the animation scene, having only used the animator on Solidworks to date. I would like to learn Unreal Engine animation from your recommendation however, unsure where to start.

I came across these guides, https://docs.unrealengine.com/en-US/AnimatingObjects/SkeletalMeshAnimation/AnimHowTo/index.html,

provided by the software.

The question is, would this be a good place to start, allowing me to bring life and movement to my Solidworks models or is there perquisites you would recommend before this?

The models will be mechanically based so movement on gimbals and a like will be the end goal.

Thank you for giving me an opportunity to ask you a question on the group you have created.

Brett Hi, I am looking to get started on the animation scene, having only used the animator on Solidworks to date. I would like to learn Unreal...

Thanks for your question and I’m glad you’re moving into animating with the Unreal Engine for your SolidWorks CAD. Unreal Engine uses the “Sequencer” tool which is an animation application that you add your scene elements to as tracks, and then using a timeline, keyframe your way through your production (like the motion manager in SolidWorks). Whether it’s human/machine characters interacting and talking, particles or fluid simulations running, or mechanical parts moving and interlocking, everything can be placed in a timeline where you have exact control over the composition.

This raw animation in Sequencer using keyframes is a lot of mouse clicks, so let me quickly bullet point three other ways of animation in UE4, cause this is where UE4 sets itself apart from other animation software.

• Materials can be animated using their various textures and colors

•UE4 Blueprints can be made with programmable functionality for animation

That’s all nice Tommy, but what does that mean? Well... you can use UE4 materials to animate 3D surfaces to create a crowd of moving people in a stadium, or make realistic water and ocean movement, or do something like having your 3D model phase-in like it was 3D printed or teleported into existence! UE4 Blueprints you can code and fully program your 3D like a game character, an automobile, drone, or plane, or anything else in the UE4 scene. Premade animations are things animated outside of the Unreal Engine using software like Houdini, Modo, Maya, and others. These files typically include cached physics simulations, particle simulations, and/or a Bone hierarchy for implementation in UE4.

Okay, Okay Tommy! But what about my SolidWorks mechanical based designs?? Stick to the point dude! :) Once imported into the Unreal Engine using Datasmith, you can quickly bring life to your SolidWorks designs by adding a few free plugins and starting out with a template best suited for your first animation project. All the free plugins can be found here: https://www.unrealengine.com/marketplace/en-US/free but my goto for every project and I cannot recommend enough is the “Automotive Materials” pack found here: https://www.unrealengine.com/marketplace/en-US/product/automotive-material-pack

When you create your first UE4 project, it will ask what type of project you want to create. Of course don’t be fooled, they’re all the same project just catered to jumpstart your production. 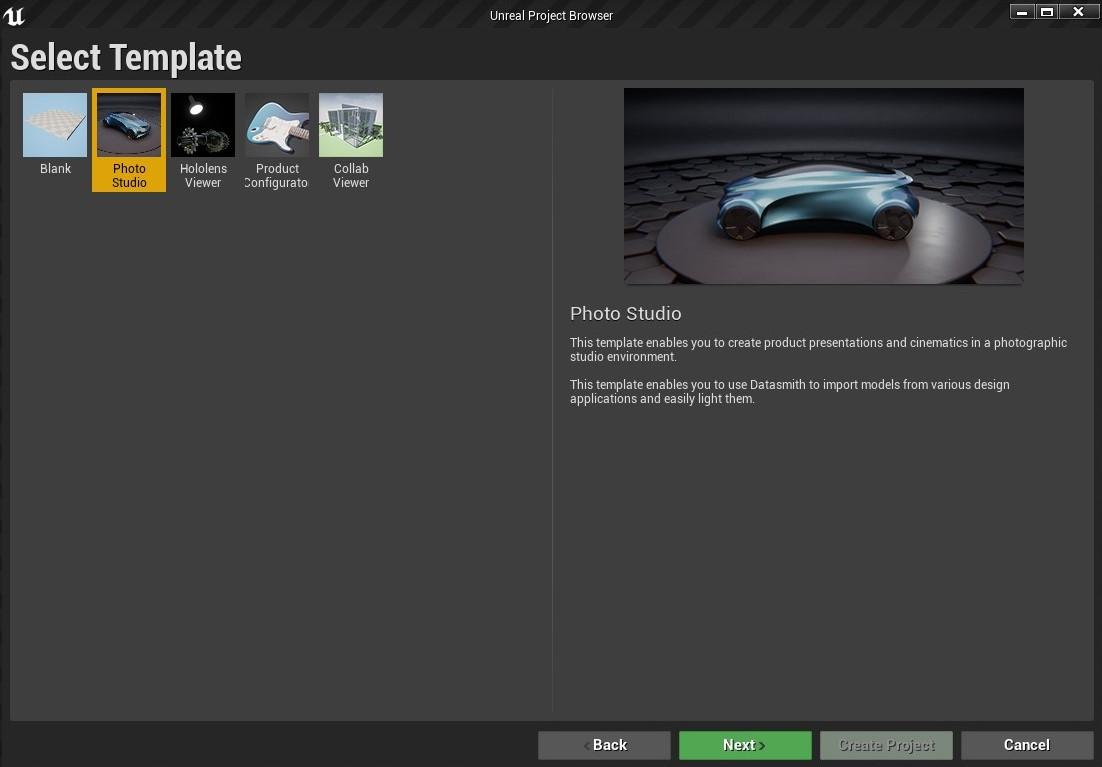 My most recent project on GrabCAD (https://grabcad.com/library/hy5-hydrogen-pc-1) I used this template pictured above to jumpstart my SolidWorks design entry. I used some animated materials (the back wall and PC LED color changing), some super basic programming (made the PC fans spin, boring but dynamic!), and the Automotive Materials plugin mentioned above for a PBR workflow. All that's left is placing cameras and animating them along with a few parts to produce my animation. It took me three days to finally animate it, but I spent the first two days just trying different ideas cause I didn’t have a clear goal of how I wanted to display my 3D.

With all that said, plus a double espresso, you can take your SolidWorks model into the Unreal Engine, create a scene, apply materials, and render out an awesome animation in under a few hours. More of a real-world reference, a recent client was surprised how fast I could render out their animations with the same or better quality than past contractors. In about a week I put out 10 high-quality 4k animations using their SolidWorks CAD and Unreal Engine Sequencer with a lot of moving parts and configurations using many of the techniques mentioned above. While that speedy of a production is a good goal to have in the future, do not become discouraged if an animation project takes you a week to finally execute. Each next project you’ll do something even better, faster, and more productive in the Unreal Engine. Hope it helps, and best of luck on your animations Brett!