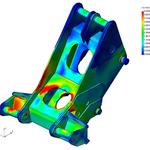 Created by Ramachandran Seetharaman on 8 June, 2018

I'm a former Creo Simulate and Mechanica instructor. If anyone has Creo Simulate related question, feel free to post it and I'll do my best to help.

I am evaluating products for topology optimization and Creo is one of the suggestions. Have you used this feature in Creo and what is your opinion on the topic? Thank you in advance!

I've seen it but I personally have not used it. It does look pretty amazing. At work we're on Creo Parametric 3.0 in the process of upgrading to 5.0 (once we resolve the visibility and GD&T issues). We are buying seats of Topology Optimization, but since it's not available until 5.0, I haven't had a chance to use it. Obviously Additive Manufacturing has a ton of benefits in many fields (especially aerospace) and Topology Optimization holds a lot of promise.

Hi Dave! I am author of CAEplex, a FEA app which is 100% integrated into Onshape: https://www.onshape.com/cad-blog/partner-spotlight-using-caeplex-for-finite-element-analysis-in-onshape

Hi Dave, i would like to do a full simulation on assembly for my projects. Does Creo simulate supports to do simulation along with the motion of a assembly?

I've been using Onshape for a couple weeks now. I'm impressed with the ease of part- and assembly- modeling, and the data management and collaboration tools are game changers. I haven't explored any of the apps yet but I'll take a look at CAEplex.

If you're analyzing a mechanism, you would probably be using the Mechanism Dynamics Option (MDO) in Creo Parametric. Back in the day that used to be part of Mechanica (the precursor to Creo Simulate) but now it's its own separate module. With MDO, you can perform Dynamics analysis that incorporates mass / inertia, springs, forces, moments, and so on.

You can take the resulting forces and use them as load cases in Creo Simulate, for example, in a static or dynamic time-varying analysis.

Creo Simulate can be used to perform analysis on both parts and assemblies.

Dave Martin Hi, Jeremy,I've been using Onshape for a couple weeks now. I'm impressed with the ease of part- and assembly- modeling, and the data mana...

Great. Let me know if you have any question, I am usually at the other end of the chat :-)

See this 1-min video to see how it works: https://www.youtube.com/watch?v=uvzzPyRYk_c