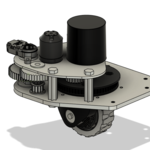 This project initially began under the banner of FRC team 6635, but has continued to evolve since the unfortunate closure of the team. Since then, the project has continued development, now with the intention of eventually developing a simple, yet highly effective 3D printed and CNC machined swerve drive system for use in FRC, as well as potential systems for combat robotics.

Many FRC teams have been turned off to swerve drive by the difficult to master design, complex programming, and expensive nature of the drive system. With this in mind, we are working hard to create a more accessible version of this drive system that requires minimal manufacturing other than 3D printing.

As of late 2019, we are working on several different systems with varying capabilities, as well as different manufacturing requirements. We also decided to begin incorporating some components sold by Swerve Drive Specialties of team 2910 to improve the effectiveness and reduce the footprint of the system.

So far in 2020, we have nearly finalized development of our flagship FRC design, which we are currently calling the Gremlin. This design currently weighs around 3.5 pounds each, including motors. Each module costs around $150, although it requires some CNC'd and 3D printed parts. However, we are currently working on a parts kit that comes with all manufactured parts, this enables teams to source their own COTS parts and only buy what they need.

Additionally, we started working on 3 different swerve drive designs optimized towards combat robotics. These will each be optimized for 3 different weight classes of combat robotics; beetleweight-hobbyweight (3-12 pounds), featherweight-lightweight (30-60 pounds), and middleweight (120 pounds). We are not currently working on a design for heavyweight or battlebots sized robots, but we are considering it in the future.